When the pandemic and lockdowns began, and we lost our regular flow of visiting rug cleaning professionals coming to train and learn from us in San Diego, I began a weekly email to the industry called “Cool Rug Friday.”

Each week I would share photos and a story about a rug that week that was one of our “rescue rugs” or visiting rugs coming to us for wash and repair.

This post was one that generated the most comments and compliments, so I wanted to share it on our Blatchford’s blog.

I hope you enjoy this little cool rug and its story. This is a reprint of my share on social media, and if you want to see past (and future) Cool Rug Fridays, if you are on Instagram you can find them under the hashtags #coolrugfriday, #rugchick, #rescuerugs. 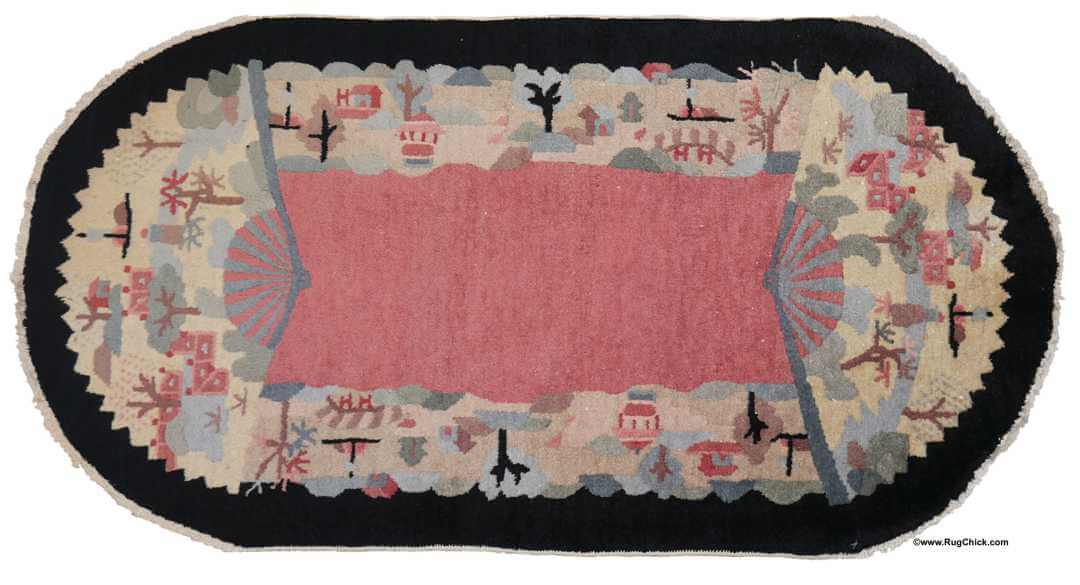 This is a little rug that I rescued from an antique shop. It was discarded, dirty, and hiding in a corner.

One of the magical powers that rug cleaners have is that they can see what a rug will look like clean even when its underneath dirty layers of neglect.

If you know the rug production and the quality of the wool and dyes, then you know whether something will bounce back to life or not with a really good wash.

I recognized this as a little Fette-Li rug. One of my favorite rugs from China, woven in the 1920s/30s.

If you google “Helen Fette” you will find short descriptions on many rug sites about her being an American missionary in China who got into the rug making business with a Chinese partner (Li Meng Shu).

However, a few of the parts of the story I do want to share, just in case you have the opportunity to have a Fette rug visit you.

Helen traveled to China with her husband Franklin Fette, and their two young children, for a work contract he had with the Chinese government to build a public health program. During their five week boat trip to arrive in 1919 there was government upheaval and his contract was lost.

A young family stuck in another country, without the promised resources that took them there.

(Just a historical note, the Spanish flu was a worldwide pandemic from February 1918 through April 1920, infecting a third of the world’s population and killing tens of millions. With what we have shared over the past year together with COVID, that gives us a small idea of what this much more devastating and dangerous period would have been like for a family trying to survive.)

The Fette family were able to find help with housing at the Methodist Mission School where Helen became a school teacher, and Franklin eventually taught chemistry at the local university.

Through a series of events, Helen ended up helping a local rug maker sell a few rugs in order to help raise money for a severe famine happening in the country in 1920-21. It was through this experience that the thought of helping to produce rugs, and sell them to Americans, became an idea that grew into a reality.

Mrs. Fette researched factories throughout the region and was disappointed by the lack of quality in wool and dyes. That is until she met Mr. Li, who was very focused on quality. He was a struggling young entrepreneur (age 23), also looking to support his family, and they decided to work together as partners.

She was to become President of the Fette-Li Rug Company, overseeing design, quality control, and sales. He was in charge of production and their work force.

It is Helen Fette who helped bring historical Chinese motifs in other areas of their arts into these rugs. She was instrumental (with her own chemistry background from Wellesley College) in crafting colorfast chrome dyes with German dye-masters for use in their rugs, with a wide selection of shades to choose from.

All of their production was hand spun wool and even hand spun cotton for the warps and wefts. Quality was paramount. 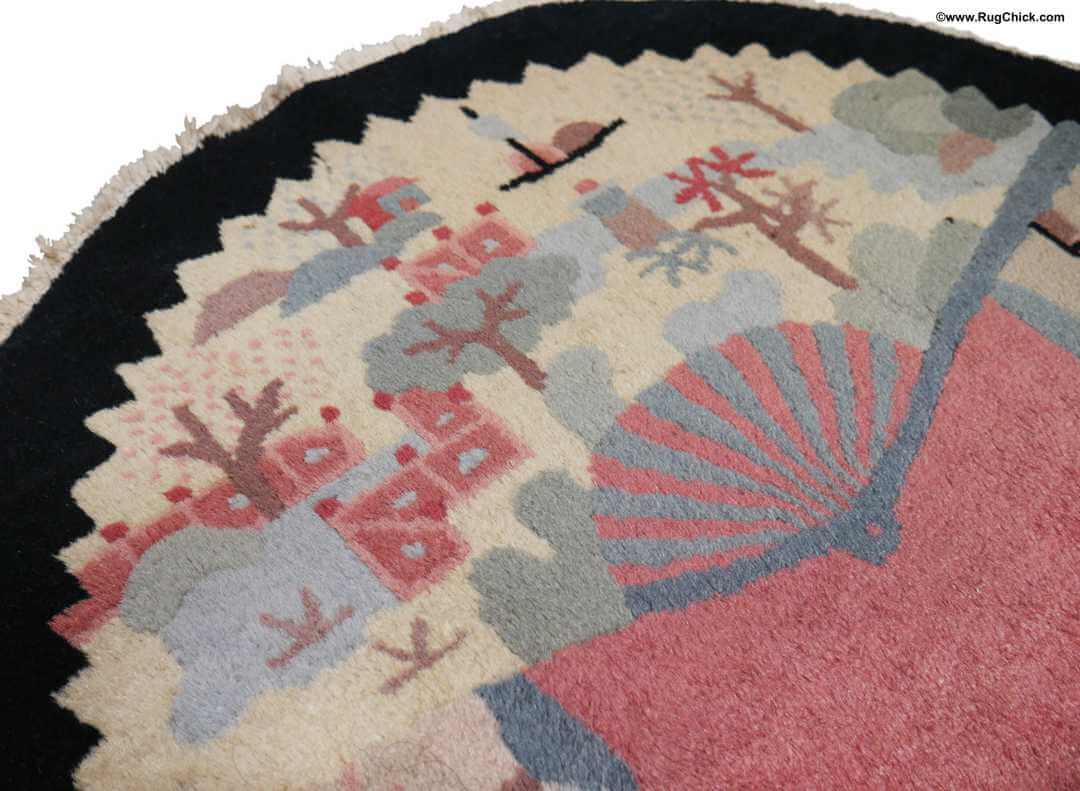 You will notice that Fette-Li rugs do not fade with age. They are not chemically luster washed as many Chinese rugs are. Fette-Li colors hold with time. The sheen that these rugs have is not chemically manipulated, it is a natural shine. 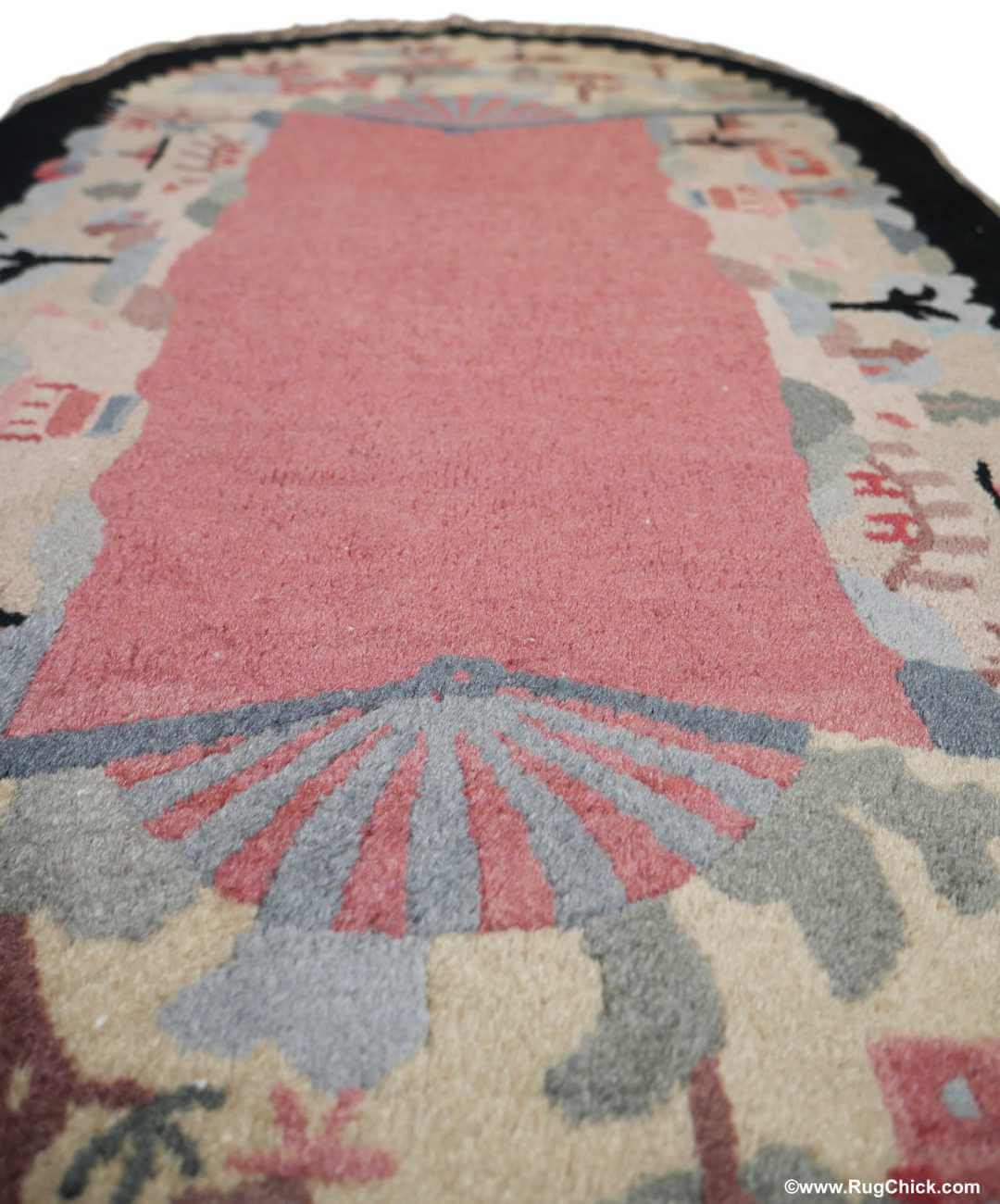 When Mrs. Fette met Mr. Li in 1920, he had a workshop with 25-30 workers. By the mid-1920’s she was President of a company with more than 2,000 employees. Her husband left the university to handle the business management, and they were producing more than 22,000 square feet of rugs a month.

They were the largest producer of high quality Chinese rugs in Peking, many being sold to the families of American soldiers and sailors.

Beyond the story of the “sales,” however, what I find fascinating is the type of work environment they built for their employees. Living quarters, on-site medical support, meals with daily vegetables and regular meat to give them more nutrition than they were accustomed to, regular exercise and recreation, as well as schooling and literacy classes.

They also paid their apprentices (unheard of at that time) and encouraged them to save their earnings, as they offered financial education.

When I see a Fette rug, those stories come to mind.

A young mother in a far away country trying to think of a new way to help her family survive.

A woman in the 1920’s and ’30’s who is running a company that has thousands of employees.

A partnership between two entrepreneurs from different countries, wanting to support their own families and their community, creating a business that had a very positive impact on many people and families, while producing beautiful floor art in the process.

In a day and age right now when so many people are pivoting, looking for their own ways of supporting their families during unpredictable times, this story has a very bright inspirational spark to it.

It shows what is possible, even in the face of very tough times, when you are determined to build something beautiful, inside and out. Something to help you care for the ones you care about.

This second rug photo is another lovely design by Helen Fette, woven by the weavers of Li Meng Shu. It’s got a little wear and tear. (We say it’s been “well loved” at our shop.) 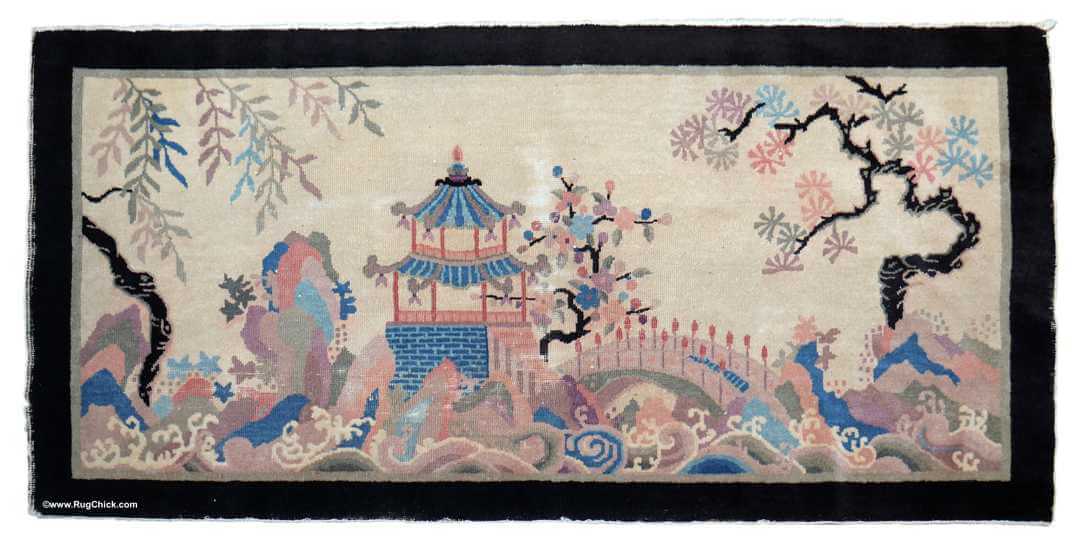 I hope you enjoyed meeting my little Fette-Li rescue rug, and hearing a little bit about the story behind the art.

P.S. If you have a library that carries copies of Oriental Rug Review, the November 1984 issue has a wonderful article by the daughter of Helen and Franklin Fette (Margaret Sutton) about the beginnings of the Fette-Li Rug Company. I dug up some periodical articles from archives in the 1930s on Helen Fette. I’m surprised this never became a book because it is an astounding achievement for a woman in the 1920’s, but it would be an astounding achievement today also. 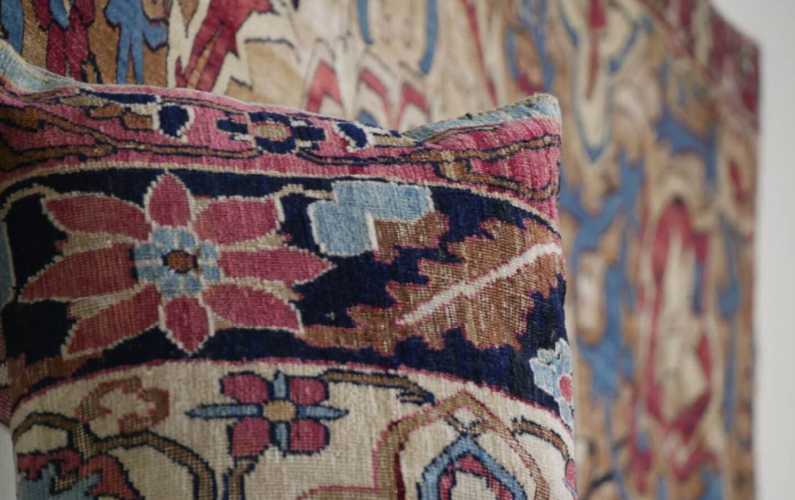 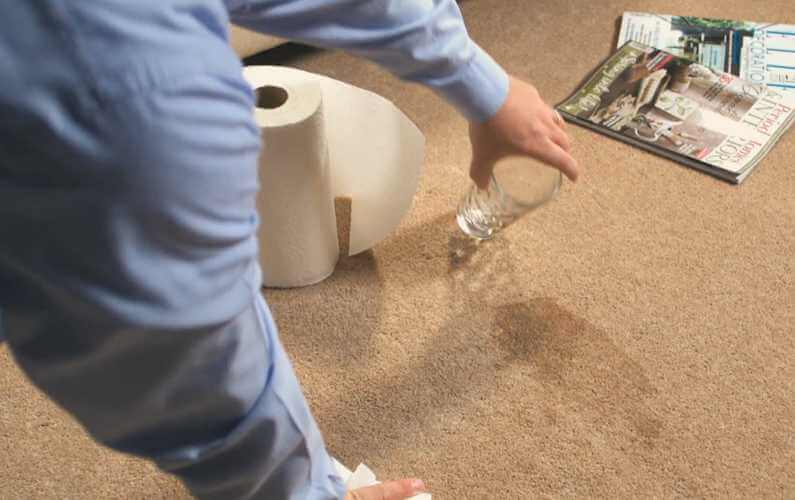 To ensure that you get the most pleasure... 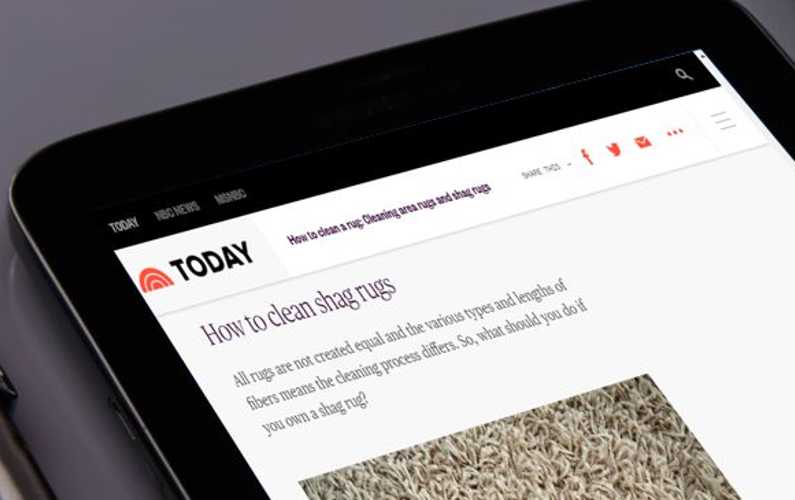 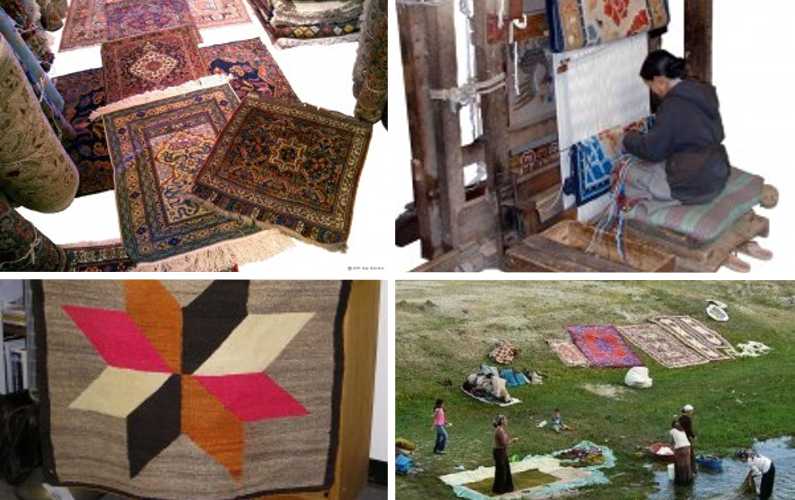 Every Rug Has A Story. What’s Yours?

What we love about rugs is that every one has a... 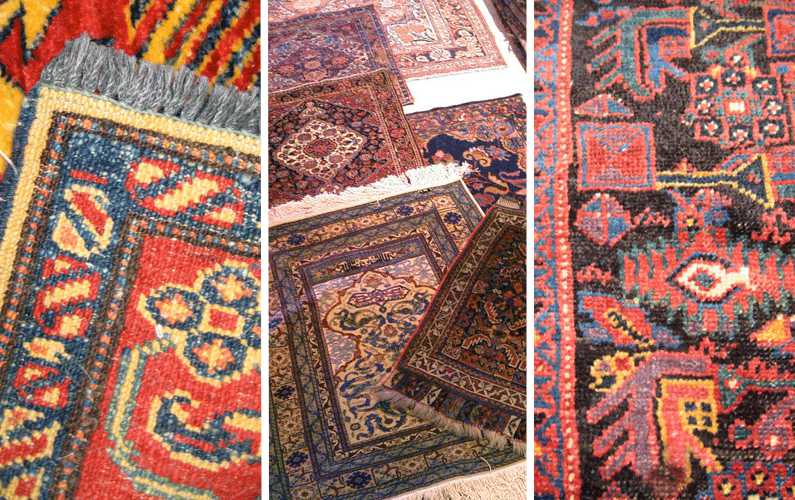 Buying Rugs. (What To Look For.) 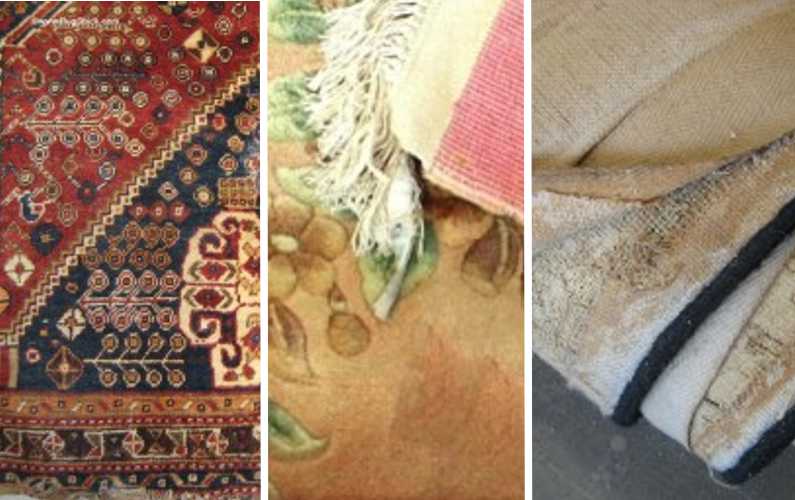 It seems that even though we do not have... 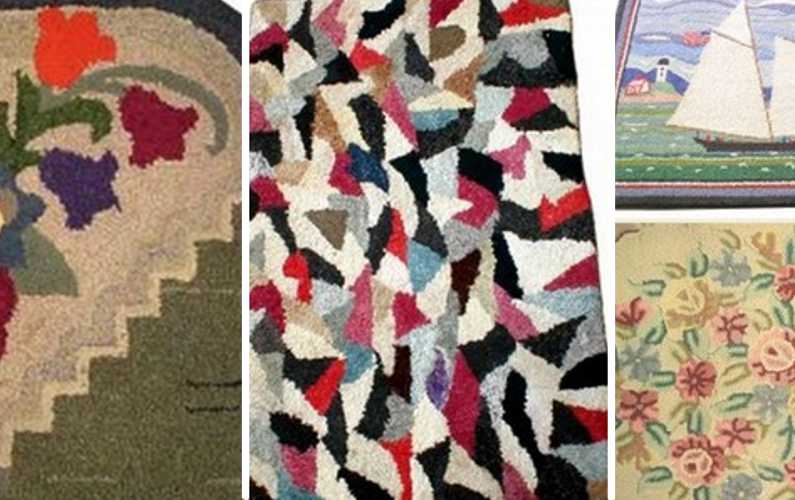 Hooked Rugs. Some Things To Watch For. 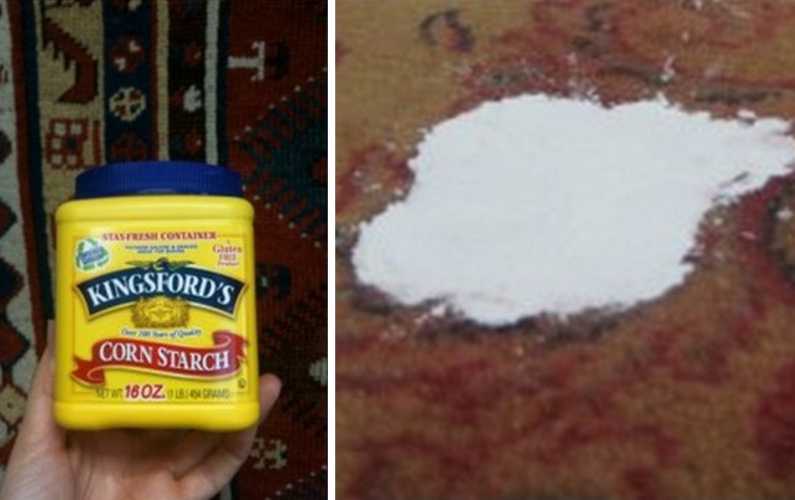 ‘Tis the Season. (For Rug Spills!)

From Thanksgiving to Christmas to New Year’s... 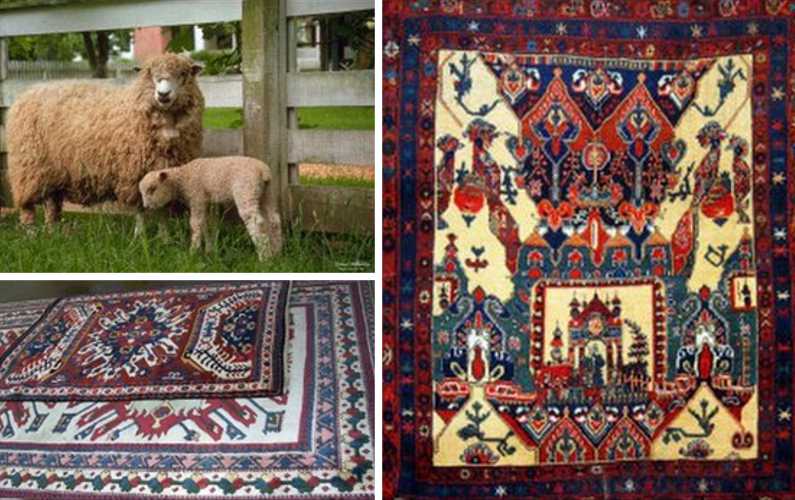 Why Wool Is The Best Rug Fiber

When anyone asks me the best type of rug to buy,... 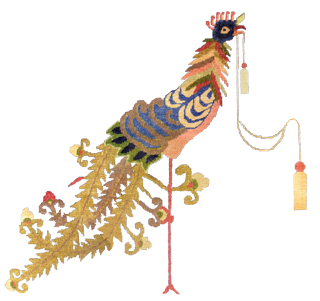 BY APPOINTMENT ONLY so we are 100% sure to have someone here to meet you and unload/load. Thank you!.

Pickup/delivery to/from your home - please contact us for details and booking.